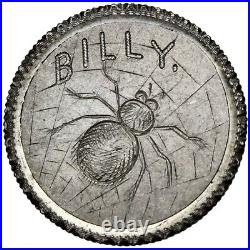 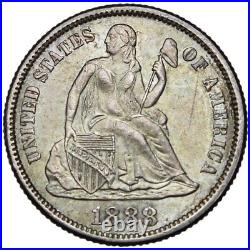 “Spider in Spider Web/Billy” silver Love Token (18mm, 2.09 g, 12h). 1888 Philadelphia or San Francisco mint Seated Liberty dime, with engraving upon host coin’s reverse: Large spider facing upward diagonally to the right on top of web; BILLY. KM A92 (for host coin). Engraving & host coin : About Uncirculated. Highly brilliant and lustrous, with a very subtle tone. A particularly spooky design for a love token, this example features a rather full-bodied spider in its web. The artist, however, was likely not an entomologist, as spiders have eight legs rather than six, as is the case here. Nevertheless, an interesting subject matter with an elegantly engraved name as well (appearing to have been done with single pricks to form the steady nature of the letters). Being borrowed from the early 18th century practice in Great Britain, and being related to even earlier forms of engraving on European coinage, “love tokens” were an extremely popular form of sentimental art that saw their high point in the United States in the mid-to-late-19th century, whereby coinage was smoothed down on one or both sides, and some form of initials, a message, and/or imagery was engraved so that it may be presented to a loved one. The most commonly encountered’canvas’ in the United States was the dime, and usually one from the Seated Liberty series. At their height, the U. Rising again in the early-mid 20th century during the depths of despair that were the world wars, this form of coin art, usually referred to in this context as “trench art, ” would see another revival, offering soldiers a brief chance at escapism through sentimental creativity. This item is in the category “Coins & Paper Money\Exonumia\Tokens: Love”. The seller is “numismagram” and is located in this country: US. This item can be shipped to United States.